The Barossa experienced a wetter and cooler (2°C) than average winter and spring with good soil moisture levels. Vines grew slowly but healthily, mostly flowering well and setting a good number of bunches.

Temperatures were below average in December and January with few heat spikes and rains of 40mm spread evenly over four events kept the vines healthy with an unhurried veraison.

The 30 - 40mm summer rains of 4 - 6 February were followed by windy conditions and four consecutive 37°C days. This helped dry out canopies and prevent berry split. Additionally, soil moisture levels were topped-up, maintaining the canopies during a cooler than average summer. The rest of February remained dry and a warm March (average maximum temperature 28°C) saw the beginning of an Indian Summer which lasted until the third week of April with above average temperatures (2.5°C). This was perfect grape ripening weather with balanced sugars, colours and natural acidity.

These conditions resulted in a later harvest, some three to four weeks, than recent years, which was a return to ‘normal’. The later harvest allowed grapes to ripen more slowly and evenly with a gradual accumulation of sugars and flavours, which is exactly what we look for when making high quality Barossa wines.

The yields were around 20 - 30% higher than the five year average.

Eden Valley Riesling is predicted to be a stand-out this year and another strong year for Barossa Valley Shiraz which promises to deliver an array of styles from bright and aromatic wines from the earlier-picked vineyards through to concentrated, intense and well-structured wines. 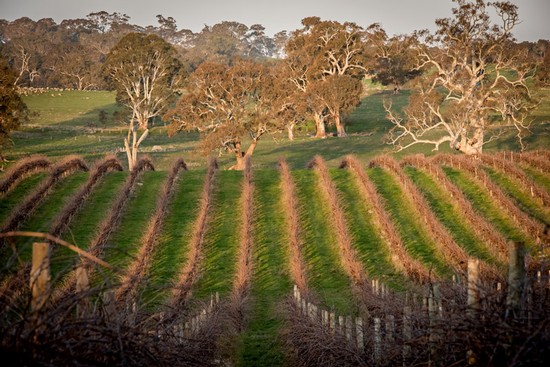 We are certainly getting used to earlier and earlier sampling and this year, for the first time, our first load of Shiraz was nearly booked for the end of January. Fortunately, a timely rain and mild conditions delayed the start allowing flavour and colour to catch up with sugar. Considering the dry winter, yields generally were a little above average (with the exception of our Eden Valley Vineyard which was 50% frosted on the 1st of December. Yes December!) due to a slightly warmer spring, great flowering and fruit set conditions. This combined with mild, late summer weather meant the grower and winemaker were happy with another solid vintage tucked away. By early March, 70% of our harvest was in and with another nice drink from the heavens, vintage slowed right down building flavour in the late ripening varieties like grenache and mataro, as well as great results from our Eden Valley reds and whites. We finished harvest with our Eden Valley cabernet sauvignon on the 15th of April. This vintage really highlights how tenacious and robust grape vines are, producing good yields and great quality in a very dry season (but they can’t sustain dry conditions forever). Fortunately, a more normal winter this year with much needed rain is refilling the soil and water resources.  Bring it on!

Good winter rains and warmer temperatures in early spring brought about slightly earlier bud burst and excellent shoot growth. A lovely growing season with no crazy, stormy or very windy northerly weather to affect flowering resulted in a great fruit set across all varieties. However, the northern Barossa, and a few other seemingly random patches of vineyard, were hit by late frosts resulting in a huge loss for that sub region. After a quite chilly Christmas and New Year the warm and dry weather was upon us, perfect ripening weather. An early and fast vintage for the Barossa Valley had Langmeil at full fermentation capacity for three and a half weeks meaning 75% of our grape intake in less than a month, phew! The later ripening varieties like Grenache and Mataro still took their time and of course Eden Valley Shiraz and Cabernet Sauvignon are always late – so vintage soon wound down to a leisurely pace ending in the middle of April.

Overall 2015 was an excellent vintage with great flavour, colour and intensity across the board.

A much needed soaking winter and early spring rains led to a great start to the 2014 vintage.  This didn’t last as late spring and early summer rain was nearly non-existent, adding to the flow on from the previous season’s drought.  Yields were still below average, exacerbated by strong wind events during flowering and very hot conditions in January with 14 consecutive days over 40C.  Vintage was looking like a hot, hard and fast one until mid-February, when the heavens opened up and dumped 90ml in the Barossa Valley and 150ml in Eden Valley.  Concerns for crop loss were fortunately alleviated as there was minimal grape splitting in the whites and all the reds just said thank you very much. After a three-week delay for grapes to return to previous ripeness levels, the rest of vintage was mild - extending hang time for great flavour development and resulting in a calm and steady intake of great quality fruit.  The nice weather broke midway through April and hindered our patience with late ripening Eden Valley Cabernet, so our last crush for the year was the 28th of April. Overall, a very good vintage with a few anxious moments thrown in.

2013 was definitely a vintage of highs and lows. Fortunately, the highs were the quality of grapes across all varieties. The lows unfortunately were the yields, with some Shiraz vineyards down by 50% - 80% as a result of extremely low rainfall during winter and spring. The Barossa Valley received only half of its average rainfall between July 2012 and March 2013 creating a very stressful environment for grape growing, especially for dry grown vineyards like the Freedom which yielded less than one tonne per acre. The low yields ripened early and quickly so vintage kicked off two weeks early, with a mad rush to keep ahead of rapidly rising sugar levels. A large percentage of our harvest was completed before March and for the first time ever we were finished with picking well before ANZAC day and our Bella Rouge Rose was in the bottle by mid-May. Overall the quality was high with intense colour and flavour, ripe tannins and surprisingly good acidity with most red parcels and the whites showing great varietal character and acid balance. I’m extremely happy with the 2013 wines, there just won’t be as much of them to share.

Great winter rains in 2011 saw vines flourish leading into the season ahead.  A reasonably mild summer with only a couple of heat spikes meant vintage kicked off to a normal start in the third week of February. Early ripening Shiraz parcels, early picked Riesling and Cabernet Sauvignon for Bella Rouge showing the true potential of the vintage.  A timely rain at the end of February brought with it a very mild and dry autumn, with lovely cool nights and a more gentle pace for ripening, allowing vintage to run smoothly, ending mid April with beautifully ripened Eden Valley Shiraz, Cabernet Sauvignon and Mataro. Overall, quality excelled with all varieties, making classification difficult yet exemplary.  Just the way I like it. I’m excited!

The 2010/2011 season presented various challenges primarily related to the La Nina weather pattern that Eastern and South-eastern Australia experienced through the recent summer and autumn seasons. Fortunately, better spray technology, 100% hand picking and understanding of diseases enabled all to avoid major disaster. The growing season was wetter than average and summer saw well above average rainfall and much cooler temperatures slowing the rate of ripening and delaying harvest. The cool summer and autumn did however produce very interesting wines showing finesse and elegance, with Shiraz and Mourvédre offering more pepper and spice than usual and Cabernet Sauvignon displaying excellent varietal character.

The Barossa experienced its best rainfall in five years during the winter and spring of 2009 and provided good soil moisture for the onset of the growing season. Late spring was fairly mild with some moderately warm days, resulting in an early budburst. Warm and mild weather ensued for the remainder of the growing season so canopies remained very healthy and ripening accelerated for an early vintage. The onset of cool nights in mid-March slowed the final harvest for some later varieties and vineyards. In summary, the 2010 wines are proving that this has been an exceptional year for the Barossa.

The lead up to harvest, whilst quite dry, was relatively cool, apart from a burst of hot weather in late January to early February. Fortunately, the weather then settled to warm days and cool nights allowing the vineyards to recover and the majority of the grapes to ripen slowly, producing wines with excellent colour and flavour. While the volume is lower than 2008, quality is exciting, as the white wines are showing well, with Riesling being the stand out variety. It is an outstanding red wine year, with the wines exhibiting strong varietal character accompanied by incredible depth of colour.

Despite below average winter and spring rainfall, good rains during budburst provided an exceptional start to the growing season that resulted in strong, early growth. Given the drier and hotter conditions, excellent growth continued, which advanced many of the vineyards’ normal flowering dates by approximately two weeks. In early March there was a prolonged heat wave over a two week period that consistently pushed daily temperatures above 35°C. Careful management of irrigation and subsequent soil moisture through this period was an important factor in maintaining both yield and quality. The unusually cool nights through this month provided for ideal ripening and harvesting conditions with most vineyards remaining in great shape despite the very dry. Overall wine quality for the 2008 vintage is regarded as excellent.

Mother Nature must keep a very close eye on the wine industry; she decided to help alleviate the excess wine problem in Australia in the 2007 Vintage. Drought played the biggest part in lowering yield and restricting vine growth with frost affecting some vineyards in September ‘06. To top it off, a very wet weekend at the end of January ‘07 saw some fruit splitting, leaving the Barossa with an average yield at least 50% lower. Quality, however, was still above average with the older and ancient vineyards performing quite well, considering the conditions.
It was definitely a vintage to keep me on my toes, with some vineyards ripening up to three weeks earlier than last year, others as much as three weeks later, so vigilance in tracking fruit ripeness was paramount considering we only had half the fruit intake to maintain the Langmeil quality and style.
All Old Vine Gardens were down substantially in yield due to smaller berry size. However, quality across the board is exceptional with the result being similar to that of the ‘03 harvest: rich and intense, showing a slight dried fruit characteristic.