Destined for destruction to make way for housing, ten rows of 140 year old Shiraz vines were rescued by Langmeil and transplanted, thus preserving part of the Barossa heritage. These orphans are not without relatives. They share a common ancestory with the 1843 Freedom Vineyard, having been planted in the 1800’s on what was then the same allotment: Section 36, Hundred of Moorooroo. 146 years later the winery was able to reunite the flock and bring them home.

In the early 1990’s a group of true Barossa passionate people went about setting new standards for development in the Barossa, this group of people were part of the “Barossa Resident Association”.

This new legislation was passed and the new laws ensure that you can only develop new housing with in the town zones of the region. Now if you want to build a house outside of these zones, you will need a minimum of 80 acres for one house on the Valley Floor and 300 acres per house in the hills. They also managed to protect the hills facing into the Valley by banning all housing development for homes that would face into the valley.

While this protects the future and insures the Barossa remains a prime unspoilt viticulture region, it also unknowingly put pressure on some of the very old vineyards that still remain in the town zones.

Looking back to the founding years of the Barossa, all the major Barossa towns were founded in the mid to late 1800’s with pioneers planting grapes as early as the late 1830’s early 1840’s around these early settlements. Unknowingly these early plantings would soon be surrounded by the towns developments. Due to the very nature of these rules, it put financial and economical pressures on these parcels of land as the price for housing in the region increased dramatically.

One of these very parcels of land was home to a vineyard that was over 140 years old at the time and was destined to be pulled out to make way for new home blocks.

Langmeil Winery had been sourcing this fruit previously, and approached the grower / developer to discuss what could be done to save these vines from destruction.  The vigneron knowing the importance of these vines was also keen to see what could be done and together decided to relocate the vines by transplanting them to the winery property.

They approached Geoff Hardy from McLaren Vale who had previously and successfully transplanted some old vineyards there. Carl Lindner, one of the directors of Langmeil, saw and decided to purchase a machine that had been used previously to transplant trees. He brought this back to the Barossa and went about moving the first vine.

The machine managed to uproot these ancient vines while maintaining a large root ball and started to move each vine one at a time, a 2km round trip.  Langmeil’s tractor traveled over 640kms to move the old vineyard to the winery property.  It was a two year project and 98% success rate.

This project typifies Langmeil and all the people behind this family business.  Their approach to old pre-Phylloxera vineyards within the region has been ingrained in all by the elders of the region, and Langmeil's own beliefs.

This process inspired the name of the vineyard and the wine to be know as Orphan Bank, as the vines were orphaned and re-planted on the bank of the Para River, to hopefully continue to grow for a further 140 years under their careful eye.

The Orphan Bank Shiraz, will continue to be a wine dedicated to producing, supporting and promoting the virtues of wines made from Barossa Old Vine Shiraz vineyards. 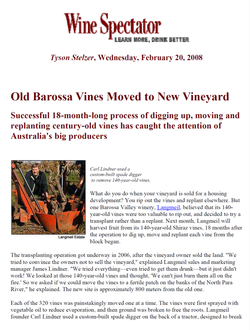 What are Orphan Bank Holders?

Quite simply, Orphan Bank Holders are Langmeil customers who back in 2006 committed to support an Orphan Bank vine for the sum of $500 for a period of 10 years.  Certificates were issued to each holder.

For the last ten years, the holders have received a complimentary bottle of Orphan Bank and have been invited to harvest their vine annually.  Each harvesting was followed by fun and festivities of song, food and wine!